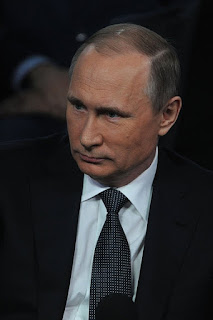 After a stint in counterintelligence with some stodgy hard-liners, Putin is sent to the Andropov Red Banner Institute in Moscow for additional training. The officers quickly take notice of the smart and unflappable trainee. He's offered a spot in the most coveted of divisions: foreign intelligence. Meanwhile, he meets a stunning airline stewardess, Lyudmila. He impresses her with hard-to come-by tickets for three nights at the theater, procured through his KGB connections. Their courtship lasts three years. They marry and are transferred on Putin's first assignment abroad: Dresden, East Germany.


At first they assigned me to the Secretariat of the Directorate, and then to the counterintelligence division, where I worked for about five months.
Was it like you imagined it would be? What you were expecting?
No, of course it wasn't what I had imagined. I had just come from university, after all. And suddenly I was surrounded by old men who had been in their jobs during those unforgettable times. Some of them were just about to go into retirement.


Lyudmila Putina (Putin's wife):
I'm from Kaliningrad. I worked as a stewardess on domestic flights. There were no international flights to Kaliningrad. After all, it was a closed city. Our flight crew was small and young.
My girlfriend and I flew to Leningrad for three days. She was also a stewardess on our crew, and she invited me to the Lensoviet Theater, to a performance by Arkady Raikin. She had been invited by a boy, but she was afraid to go by herself, so she invited me along. When the boy heard that she was inviting me, he brought Volodya.
The three of us myself, my girlfriend, and her friend met on Nevsky Prospect, near the Duma building, where there is a theater ticket office. Volodya was standing on the steps of the ticket office. He was very modestly dressed. I would even say he was poorly dressed. He looked very unprepossessing. I wouldn't have paid any attention to him on the street.
We watched the first hour of the show. During the intermission we went to the buffet. We had a good time, and I tried to make everyone laugh. But I was no Raikin, nobody was reacting to me much. Still, I wasn't discouraged.
After the show we agreed to meet again and go to the theater. My girl-friend and I had come for only three days, and we wanted to see a lot of a cultural things, of course. We understood that Volodya was the kind of person who could get tickets to any theater.
We met up again the next day, although the friend who had introduced us didn't come.

Sergei Roldugin:
I bought my first car, a Zhiguli, the original model. I had just finished the conservatory and landed a job in Mravinsky's Collective. We toured Japan and all the rest. I had more money than Vovka. I would bring him souvenirs from my trips T-shirts and the like.
Once, we agreed to meet on Nevsky. He said, "Two girls will come up to you and say they're with me. I'll be there within 15 minutes, and then we'll go to the theater." The girls arrived on time, just as agreed. One of them was Lyuda. She was very nice. We got into the Zhiguli and began to wait for him. At first, I felt terribly uncomfortable sitting with them. Some friends of mine passed by and recognized me, and it was all rather unfortunate. We sat there for about an hour. I spent the whole time exhausting these girls with conversation, or so it seemed to me.
Finally, Volodya appeared. He was always late, by the way. We went to the theater. I don't remember what we saw, of course. No idea. I only remember those friends who passed by and recognized me.

Sergei Roldugin:
One day he came from Moscow for a few days and somehow he managed to break his arm. Some punk was bugging him in the metro, and he socked the guy. The result was a broken arm. Volodya was very upset. "They're not going to understand this in Moscow. I'm afraid there are going to be consequences," he said. And there really was some unpleasantness, but he didn't tell me any of the details. Everything turned out okay in the end.

Lyudmila Putina:
His training led to a trip to Germany. He was supposed to go to Berlin, but then a friend of Volodya's recommended him to the station chief in Dresden. The friend was also a Leningrader and worked in Dresden. His tour of duty was coming to an end, so he recommended Volodya for the job. The job in Berlin was considered more prestigious and the work was apparently more interesting, since it involved travel toWest Berlin. In fact, I never learned the facts, and Volodya would never tell me. We never had a conversation on this topic.

Sergei Roldugin:
They suited one another in all respects. Of course, she began to display some temper later on. She isn't afraid of speaking the truth. And she isn't afraid to talk about herself. Once I bought a rocking chair and couldn't fit it into the trunk of my car, no matter how I tried. She started giving me advice: "You have to turn it this way, and not that . .
." But there was no way it was going to fit into the car, and it was heavy, to boot. I said, "Lyuda, be quiet." She almost went into hysterics. "Why are you men all so stupid?" she yelled.
Lyuda is an excellent hostess. Whenever I came to visit, she always whipped something up fast. She's a real woman, who could stay up all night having a good time, and still clean up the apartment and cook the next morning. . . .
Lyuda is five years younger than me. Before becoming a stewardess, she studied at a technical college. She dropped out during her third year. She was trying to decide where to go, when she and I met. She wanted advice on where to go to school. I said she should go to the university. She decided to apply to the philology faculty, first to the preparatory department. Then she went to the Spanish department and began to take languages. She learned two languages, Spanish and French. They also taught Portuguese there, but she didn't study that much. And when we went to Germany, she learned to speak German fluently.

Sergei Roldugin:
Before they left for Germany, Masha was born. My former father-in-law had a dacha near Vyborg, a wonderful place, and after we picked Lyuda up from the maternity hospital we all went out there and spent some time together,Volodya, Lyuda, my wife, and I. Of course, we celebrated the birth of Masha. We had dances in the evenings.
"Hold the thief, hold the thief, it's time to catch him!" Vovka could move well, although he didn't seem particularly good at ballroom dancing.

Before we left for Germany, they had to put Lyudmila through a security clearance. They began this process while I was studying in Moscow. At that point I still didn't know where I would be posted; but wherever it was, it would place stringent demands on my family members. For example, one's wife had to be in good health and be able to work in a hot and humid climate. Imagine you've gone through five years of training, and then, when you're finally ready to go abroad, into the field, to work, your wife can't go due to poor health. That would be terrible!


They checked Lyudmila out thoroughly. They didn't tell her about it, of course. They called her into the university personnel department when it was all over, and reported that she had passed the special clearance procedure. So we went to Germany.

Posted by luisavasconcellos2012@gmail.com at 7:22 AM